Forbearances at lowest level since April, but further drops in doubt
admin
February 13, 2021
11:28 am
The Federal Housing Finance Agency's recent allowance of a 3-month extension of CARES Act forbearances stands to upend the trend in plan exits.

The number of borrowers in forbearance is at its lowest level in 10 months but with conforming borrowers now able to extend their plans, it’s uncertain whether that amount will drop further in the near future, Black Knight said.

There were 2.67 million borrowers, or 5% of the 53 million outstanding mortgages, in a forbearance plan on Feb. 9, the fewest since the middle of last April. These loans have an unpaid principal balance of $532 billion.

One week prior, there were 2.71 million borrowers, or 5.1% of the outstanding mortgages, with a UPB of $541 billion in a forbearance plan.

The declines over the past two weeks were driven by plans expiring on Jan. 31, Black Knight said. 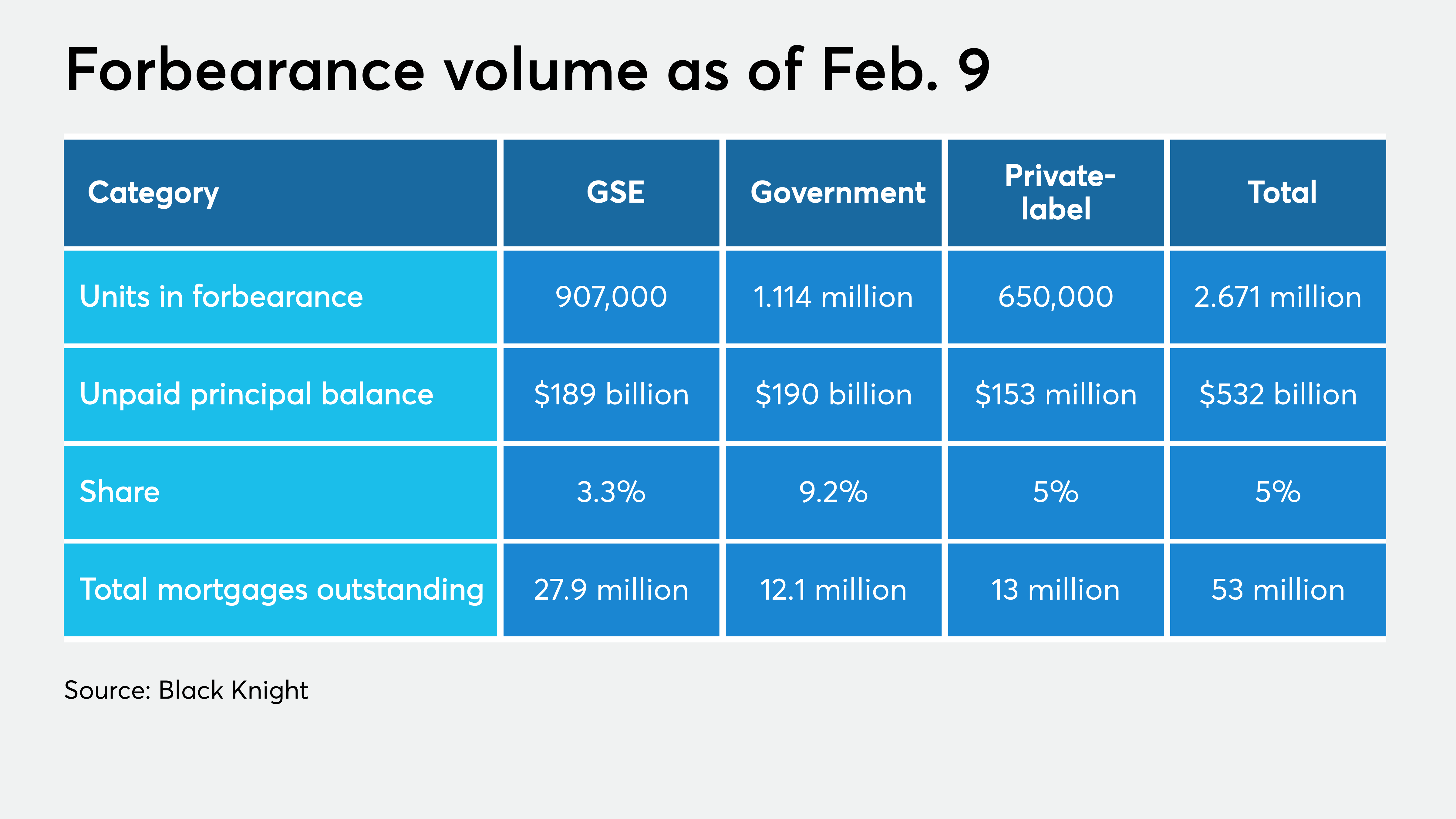 The Federal Housing Finance Agency’s Feb. 9 announcement, which allows borrowers to request an additional three months of relief for Fannie Mae and Freddie Mac loans at the end of this month, stands to upend trends in forbearance exits.

"Significant unknowns remain, one of which is the impact such extensions will have on the overall recovery," Andy Walden, Black Knight's director of market research, wrote in a blog post. "We've already seen evidence of forbearance starting to erode borrowers' equity positions."

Since early December, the month-to-month declines have been averaging less than 2%, he noted.

Now, with the FHFA extension, that could be slowed even further as roughly 30% of the existing forbearances for Fannie and Freddie borrowers were set to expire at the end of March.

If Ginnie Mae should follow suit and extend the timeline on the Federal Housing Administration and Veterans Affairs mortgages in its securities to 15 months, at the current rate of improvement there would still be some 2.5 million homeowners in forbearance at the end of June when the first round hit their new 15-month expirations, Walden said.

The largest number of mortgages in forbearance are the government-guaranteed products, with 1.11 million loans in a plan. But because loan amounts are typically lower than conforming loans, the UPB is only slightly higher, at $190 billion. The previous week, there were 1.26 million FHA and VA loans in a plan with a $192 billion UPB.