New debt investment pact with Oaktree gives Ocwenâs stock a lift
admin
February 11, 2021
11:09 am
The agreement would generate $250 million in proceeds, which the nonbank mortgage company plans to use to pay down and refinance existing debt, while also investing in its servicing and origination businesses.

A new note agreement that will generate more than $250 million for Ocwen Financial Corp. initially boosted its shares early Wednesday as investors welcomed plans to use the money to refinance existing funding and make investments.

At roughly $29.50, Ocwen’s stock price was up by about $2 mid-day Wednesday on the East Coast, compared to where it was before the new debt investment pact with Oaktree Capital Management was announced late Tuesday.

Business opportunities and expenses are both broadly rising for servicers as regulation intensifies and federal forbearance is extended. That’s driving large players like Ocwen to handle funding in ways that achieve a balance between the two.

“We just relentlessly focus on costs and execution,” President and CEO Glen Messina said in an investor call about the debt agreement and the company’s preliminary earnings on Wednesday. 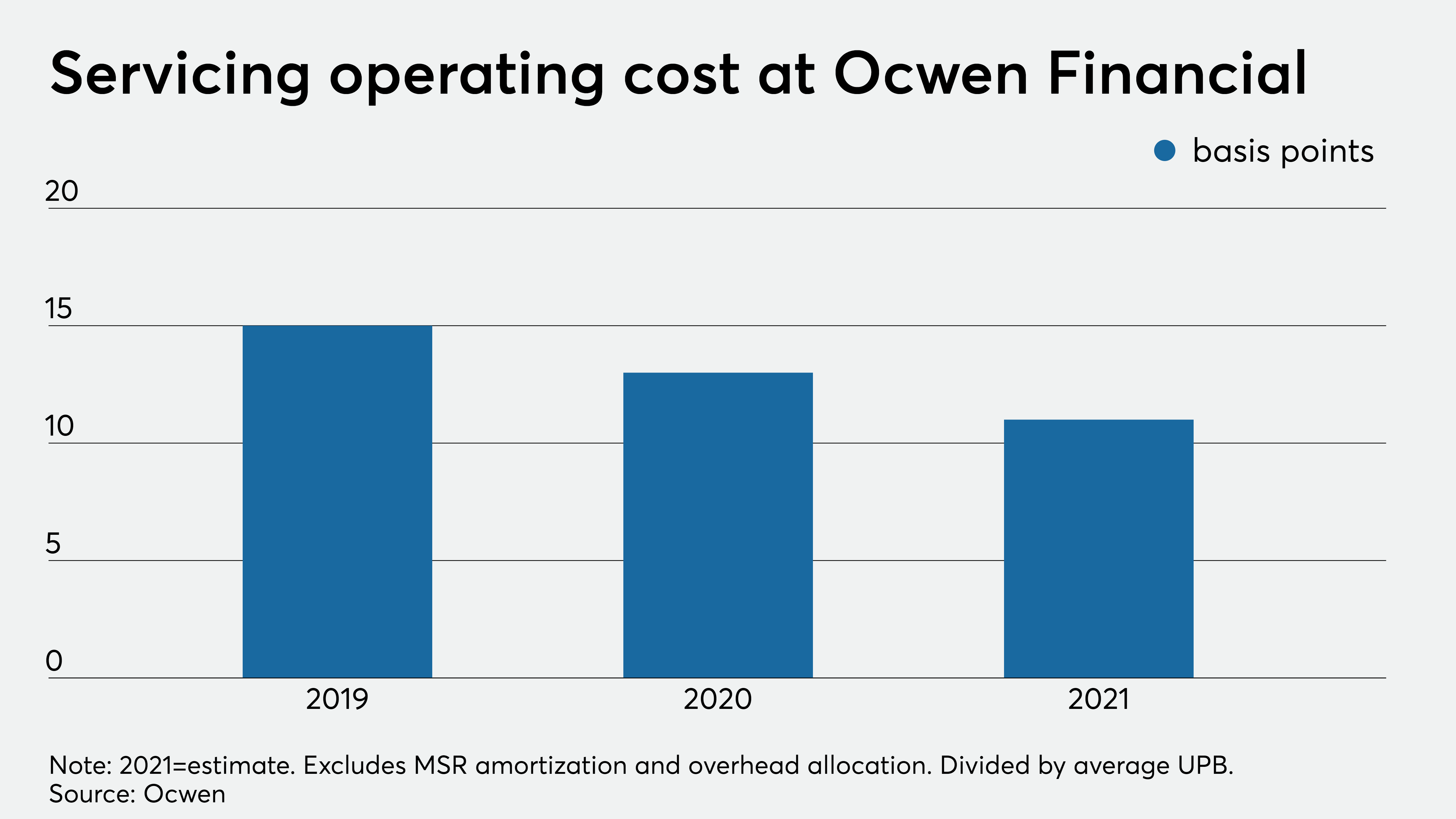 While servicing expenses have generally mounted amid the pandemic, Ocwen has recorded a 2 basis-point drop in its operating expenses to 13 basis points of average unpaid principal balance for 2020. That cost is on track to drop another 2 basis points.

Ocwen’s preliminary estimate for its fourth quarter 2020 earnings is a $7 million loss. That represents an improvement over a more than $9 million loss in 3Q20 but compares less favorably to the nearly $35 million in net income generated in 4Q19, prior to the pandemic.

The company specifically plans to use $100 million of the proceeds from the new subordinated, high-yield notes to pay down and support the refinancing of its existing corporate debt, while investing the remainder in its servicing and originations businesses.

The investment in originations will be aimed at diversifying the business and may include acquisitions.

The OFC HoldCo notes in the debt agreement have a six-year term, and a 12% cash coupon adjusted for an original issue discount that helps the company reduce its interest expense.

The notes also have a 13.25% payment-in-kind coupon. In PIK coupons, payments are made in additional bonds rather than cash, which helps reduce expenses related to investor payments.

The debt agreement also includes warrants for 12% of shares at closing, subject to adjustments. The warrants entitle investors to buy shares at a fixed price under certain conditions until the notes expire. There also is a second lien on parent company’s (OFC’s) assets but not the operating subsidiary’s assets.

Ocwen will need funds to both invest in its business and absorb regulatory costs related to servicing in part because its contending with a multistate enforcement action related to PHH Corp., a company it acquired in 2018.

Ocwen also recently broke off mediation it had entered into with the Consumer Financial Protection Bureau in an attempt to resolve past servicing allegations, saying it considered the CFPB’s demands excessive.