Nonbank stock performance has New Residential squeamish about its NewRez IPO
admin
February 10, 2021
10:58 am
But the company sees reasons to be optimistic about the second half of the year, CEO and Chairman Michael Nierenberg said during its fourth quarter earnings call

The uneven stock performance from nonbank lenders that have recently gone public has given pause to New Residential Investment, which was considering its own IPO for the New Rez division.

"We think that it will create more value for shareholders by separating the company and bringing it into the public markets," said Michael Nierenberg, its chairman, CEO and president, on its fourth quarter conference call. "But as you've seen from some of the recent attempts…some of them have gone OK; others have not gone as well."

A confidential registration statement was filed in November. If there was to be a public offering, the two companies would still be intertwined as New Residential would likely maintain a substantial stake in a publicly-traded NewRez, he said.

When asked when a decision would be made, Nierenberg said it is something the company evaluates every day.

"It's not just to take a company public…we have a public REIT (referring to New Residential) that can raise capital and help grow the mortgage company," he explained. Any decision on taking NewRez public will be tied to whether it benefits New Residential's shareholders, he said. 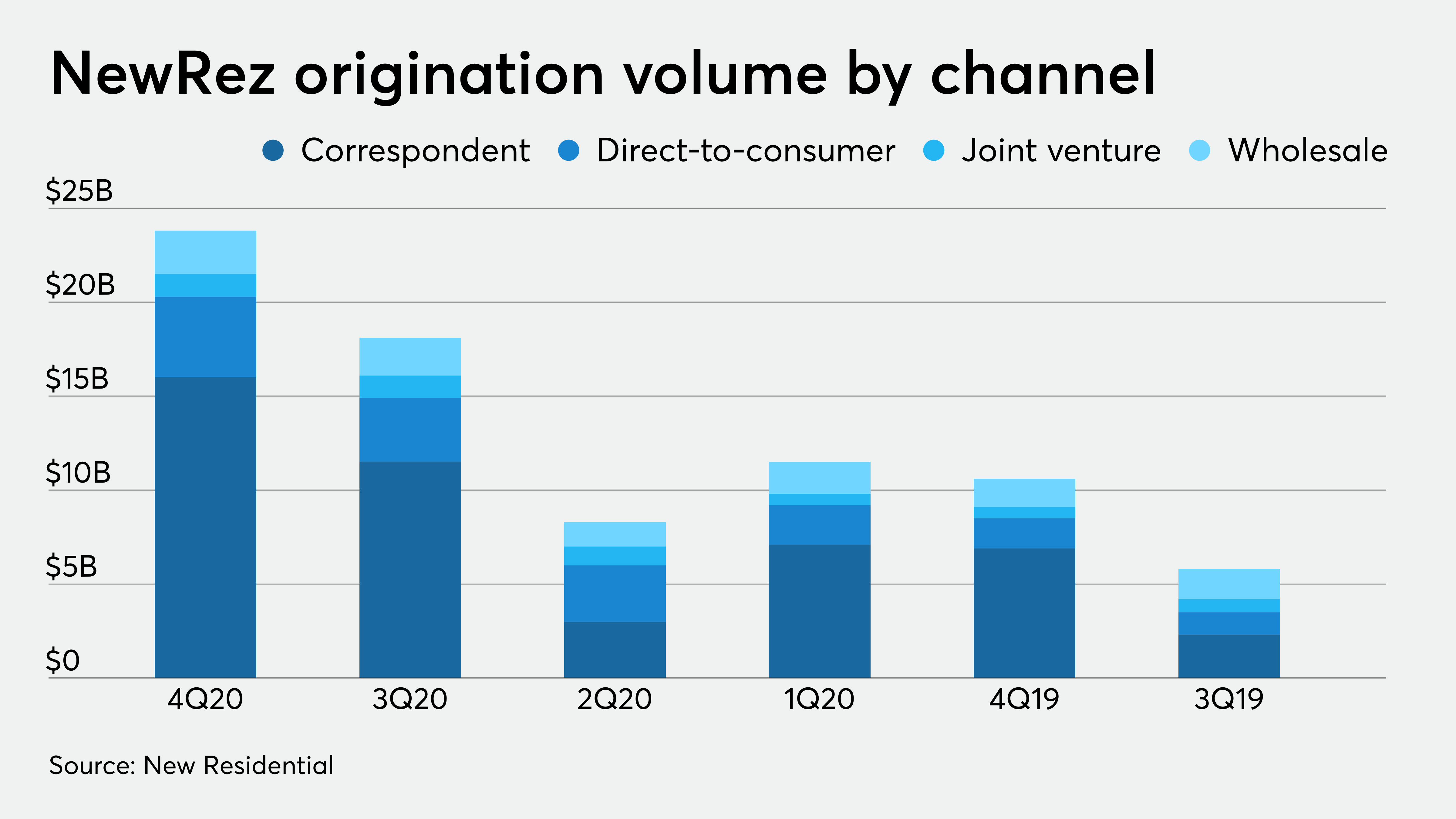 The level of mortgage production this year will be a key factor in that decision, said Randy Binner, an analyst with B. Riley Securities.

"Our view is that mortgage originations have the potential to be better than market and Mortgage Bankers Association expectations as gain on sale margins remain wide enough still that mortgage bankers should have flexibility to keep volumes at elevated levels," Binner said in a report that, in part discusses the benefits of the New Rez IPO. "This could create a more constructive environment for this potential positive catalyst later in 2021."

However the company took a massive $1.6 billion loss in the first quarter, when the value of its mortgage-backed securities investments was devastated by the Federal Reserve's intervention at the start of the pandemic. As a result, the company posted a $1.47 billion net loss for the full year.

NewRez, which became the company's primary operating business as a result of the pandemic-driven changes, had fourth quarter net income of $169.8 million in its originations unit and $36.2 million from servicing. But the mortgage servicing rights and servicer advances portion of this business lost $179 million in the quarter.

Total mortgage volume funded in the fourth quarter was a record $23.9 billion. That was led by its correspondent business' volume of $16 billion. The segment continues to recover from the secondary market disruptions caused by the Fed's actions, which cut its second quarter volume to just $3 billion.

The direct-to-consumer channel, which Nierenberg said would be an emphasis for the company back in July, did $4.3 billion in funded volume, up 25% from the third quarter's $3.4 billion and 169% over the fourth quarter 2019 production of $1.6 billion.

NewRez' gain on sale margin fell to 157 basis points from 204 bps in the third quarter. In the first quarter, NewRez expects to originate between $23 billion to $25 billion.

"From a macro view, we believe interest rates should rise, which should be great for our company," Nierenberg said.

Slower prepayment speeds will mean more cash flow from its MSRs and a higher recapture rate. The combination should overcome the likely decline in mortgage originations, he said.

That ties into New Residential's expectations for the direct-to-consumer channel, which is mostly dedicated to recapturing existing servicing customers who are looking for a new mortgage from another lender.

The company is "very excited about our growth prospects…which should lead to increased market share, higher earnings in that channel and better recapture rates for our MSR portfolio," Nierenberg said.