How appraisal waiver use is changing during the pandemic
admin
February 3, 2021
9:00 am
With the shift to a low-rate environment dominated by no cash-out refinancing, use of an alternative to traditional valuations has soared.

Appraisal waiver use has soared in the current low-rate environment, according to the American Enterprise Institute’s latest analysis of government-sponsored enterprise data.

On average, nearly half or almost 46% of loans in the current environment now have one, Tobias Peter, director of research at the AEI’s housing center, said during a conference call on Monday.

“In the low interest-rate environment we have seen this hockey-stick phenomenon where waivers have become much more prevalent,” Peter said.

However, use of waivers may not stay this high in the long run.

While roughly two-thirds of the rate-and-term refinances that currently dominate the market are using a waiver, only one-third of all cashouts have one, and 11% of purchases do, according to AEI’s analysis of GSE data from November 2020. 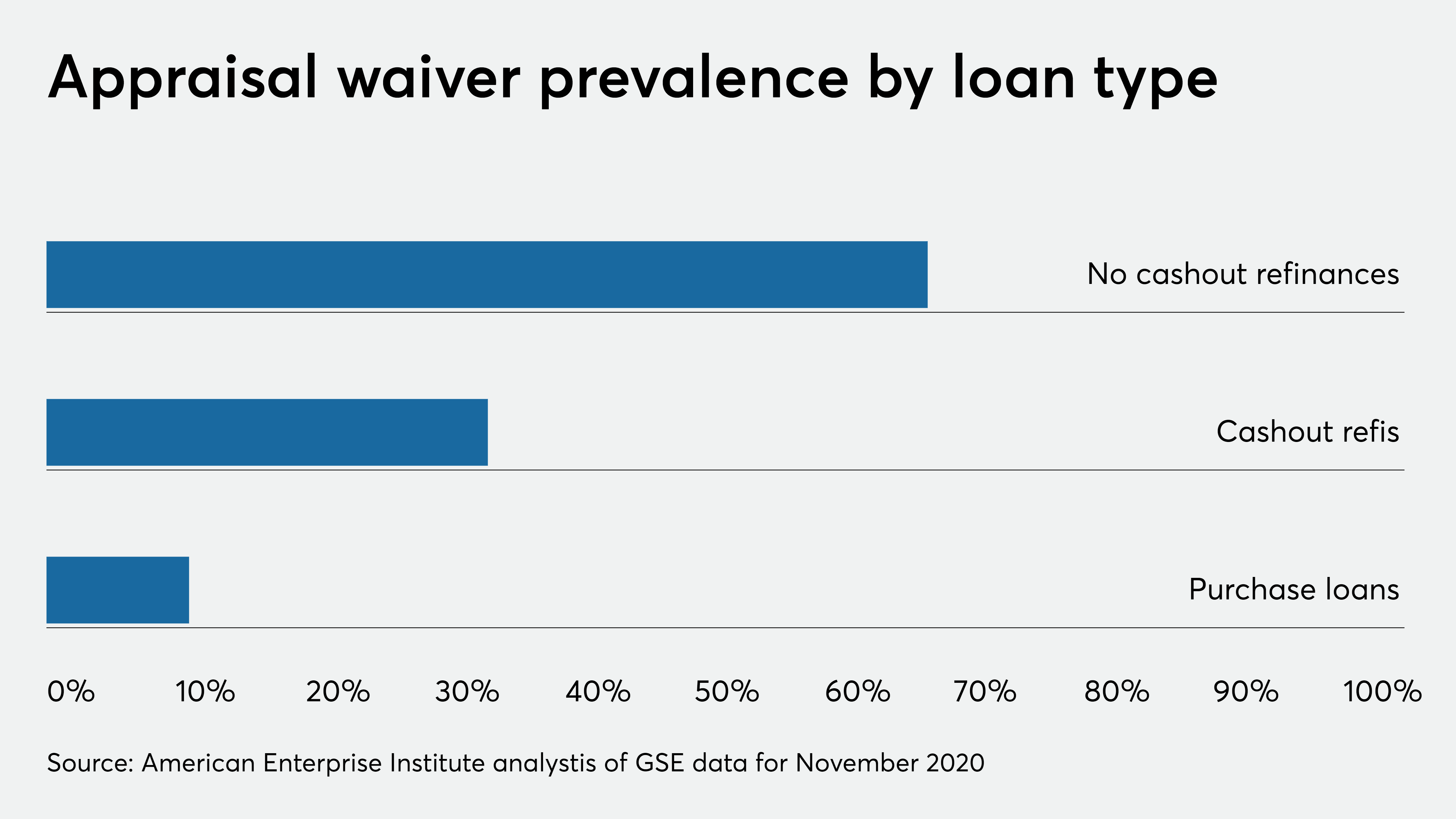 That suggests that the usage rate for appraisal waivers, which are only deployed where historical data is deemed sufficient, could change dramatically if the forecasted shift to a purchase market pans out.

Over the past several months, the gap between waiver use rates at Fannie Mae and Freddie Mac has narrowed, said Peter, who noted that Fannie originally had a lead because it has a first mover advantage. In November, however, Freddie’s share was 48% and Fannie’s was 46%.

Fannie’s usage rates initially were higher because it was the first to start using them broadly in conjunction with its expansion of property inspection waivers allowed on refinances. It later also extended waiver use to the purchase market a few weeks ahead of Freddie Mac in 2017.

While the low rates have accelerated the spread of appraisal waiver use, it was trending even prior to the proliferation of remote appraisal alternatives amid the pandemic.

Appraisal waivers have become more widespread over time, but Fannie and Freddie remain cautious about them because shortcuts like these were seen as contributing to the loose underwriting that led to the 2008 housing crash.

“During the 2008 financial crisis, appraisal quality and validity issues were the basis for many of the repurchase requests lenders received from the Enterprises,” the Federal Housing Finance Agency noted in a December request for input on the GSEs’ appraisal practices.