Slowing mortgage forbearance improvement sets up recovery challenges
admin
February 2, 2021
8:53 am
The CARES Act-related forbearances could be âlulling us into a false sense of securityâ as 12-month expirations approach, according to Black Knight.

With the first round of CARES Act-related forbearance periods approaching their 12-month expiration, millions of distressed borrowers will need further measures in order to become current on their loans, according to Black Knight.

The latest Mortgage Monitor showed a delinquency rate of 6.08% in December, up from 3.4% a year ago. Seriously delinquent mortgages — those late in payment by 90 days or more — totaled 3.43 million by 2020’s end, down from the year’s post-housing crash era high of 3.6 million.

Among the 4.9 million, 2.3 million removed themselves from forbearance and are performing, 590,000 are paid off, 186,000 are in active loss mitigation, and 64,000 are delinquent. However, 1.478 million extended their forbearance term and 254,000 are on their original term. Most plans carry a 12-month limit and an inflection point for the industry quickly approaches. 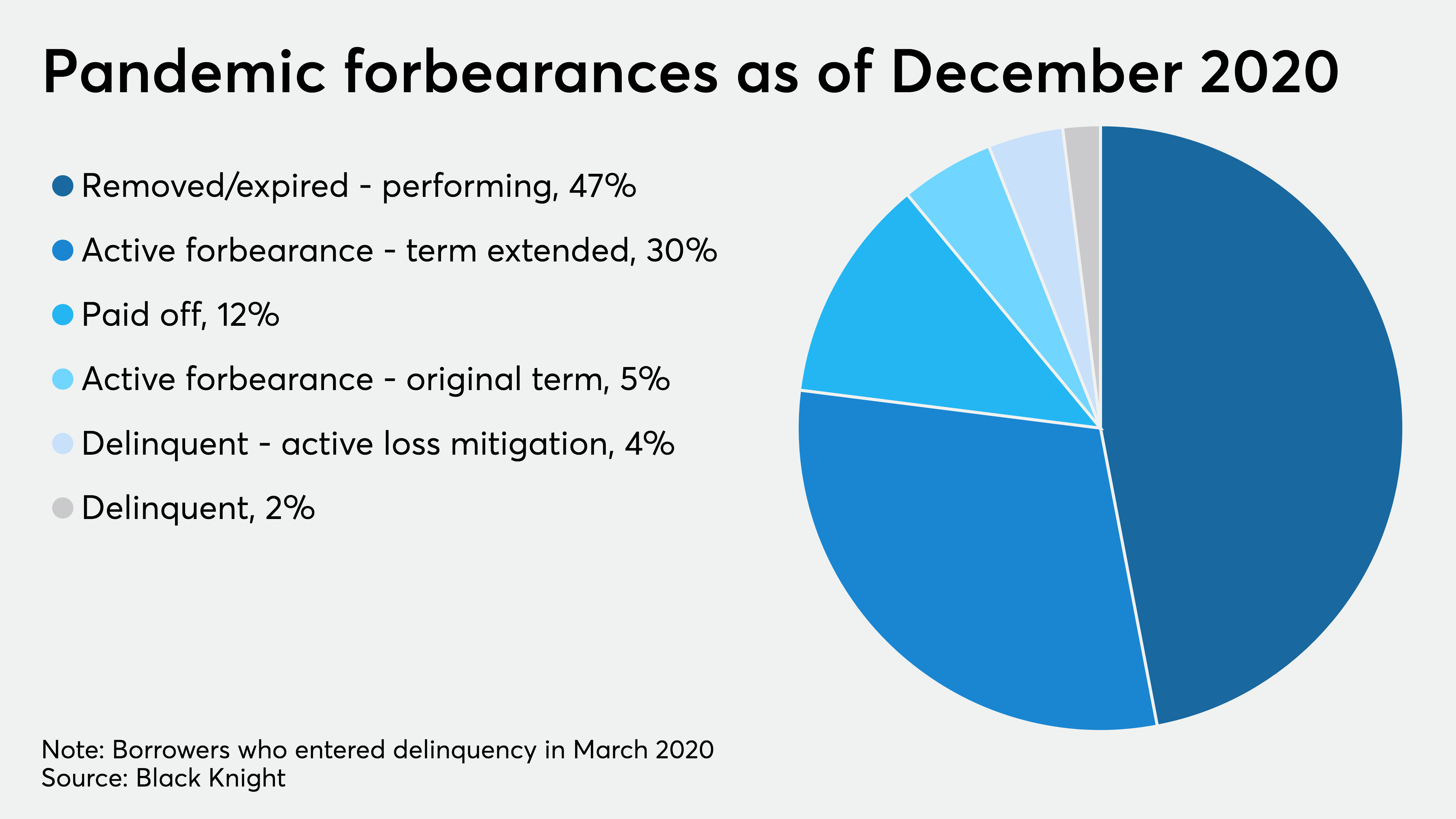 “The various moratoriums, which have kept foreclosure actions at bay over the past 10 months, may be lulling us into a false sense of security about the scope of the post-forbearance problem we will need to confront come the end of March,” Graboske said. “This clearly shows the industry-wide need for post-forbearance waterfalls to determine borrower need and readiness while foreclosure moratoriums are still in place.”

The rate of those exiting forbearance slowed recently, pointing to a higher share of forborne borrowers under distress. At the current pace, without any additional government extensions, over 600,000 seriously delinquent borrowers would roll off forbearance protections on March 31 and leave 2.5 million in active plans.

Bans on foreclosure held December's rate at 0.33% — the lowest recorded percentage since the end of 2005 — dropping it from the year-ago rate of 0.46%. A total of 7,100 borrowers started the foreclosure process compared to 4,400 in November and 39,500 in December 2019. Industry experts anticipate loss mitigation programs to be installed to avoid consumers losing their homes en masse.

“We don't currently expect huge swaths of foreclosures, we think that the workout process and the improvement in the economy will help a significant number of households,” Doug Duncan, SVP and chief economist at Fannie Mae, said in an interview. “We learned a lot from experimenting in the 2009 period after the global financial crisis. We still have the knowledge of those workout programs and different ones were successful for different households.”