Mortgage forbearances rise for second week in a row
admin
January 31, 2021
8:42 pm
The uptick marks only the third increase in consecutive weeks since reaching a peak in May, according to Black Knight.

The number of mortgages in coronavirus-related forbearance swelled at the end of the month, rising in consecutive weeks for only the third time since the number peaked in May, according to Black Knight.

Forbearances increased by 20,000 from the week before, growing to a total of 2.764 million plans as of Jan. 26. Forborne borrowers represent 5.2% of all mortgages and a combined unpaid principal balance of $551 billion, up from $548 billion week-over-week.

Forbearance totals are ticking upwards at a time when a higher share of such loans are tied to truly distressed borrowers, compared with the beginning of the pandemic, when many borrowers took the COVID forbearance only as a precautionary measure.

“Early on, about 50% of people in forbearance were continuing to make their mortgage payments,” Andy Walden, Black Knight economist and director of market research, said in an interview. “Now that we've gotten through December, it's down to about 12%. So the vast majority of these homeowners in forbearance are behind on payments.”

Among the loan types, only those backed by Fannie Mae and Freddie Mac fell week-over-week, dropping by 4,000 to a total of 925,000. Government-backed mortgages — FHA and VA — rose by 9,000 to 1.149 million overall. Portfolio and private-label securitized loans — which do not fall under CARES Act protections— increased again by 15,000 to a total of 690,000. 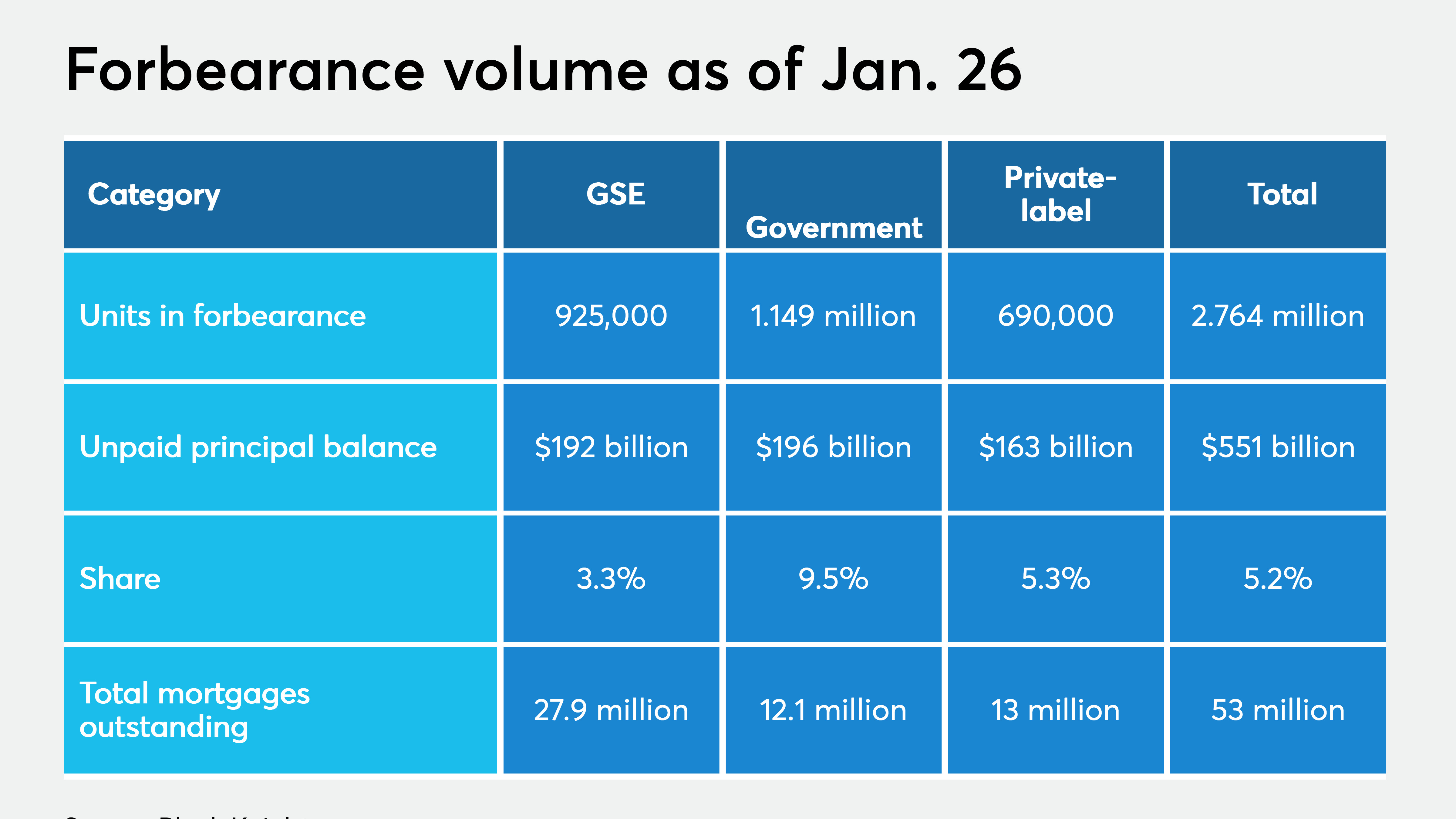 “The key date to look at is the end of March because that's when the first wave of forbearance plans are set to hit their 12-month expirations,” said Walden, who estimated that 600,000 to 700,000 homeowners will reach that expiration. “That's when we're really going to understand how that post-forbearance waterfall is functioning, what share of those borrowers are ready to re-perform through a deferral or reinstatement through a modification repayment plan and what additional programs are needed to help.”

While the current forbearance program expires on March 31, further extensions are expected. The Biden administration’s latest proposed $1.9 trillion stimulus plan would stretch forbearance, as well as foreclosure and eviction bans, to Sept. 30. While the extensions are necessary to help borrowers in need, servicers will also need consideration in the process, according to Cam Melchiorre, president and director of regulatory compliance at IndiSoft.

“I don't think we should overlook the financial impact of continued deferrals and forbearance agreements on the servicer. That could take a servicer down because of lack of capital overnight and I would hope legislators are aware of it,” Melchiorre said. “Yes, the consumer is at the front of the line for help but you don't want to create systemic problems for the industry that's trying to support everyone.”