Flagstar’s 4Q earnings slip as mortgage records a lower gain on sale
admin
January 22, 2021
6:47 pm
Despite that decline, the company notched its second-best quarterly earnings ever over that period.

The fourth quarter was the second-best ever for earnings at Flagstar Bancorp, but its mortgage business had lower revenue compared with the prior period as gain-on-sale margins dropped.

Even with the lower revenue, the three aspects of the mortgage business Flagstar participates in — originations, servicing and providing warehouse credit — were bright spots in the fourth quarter. 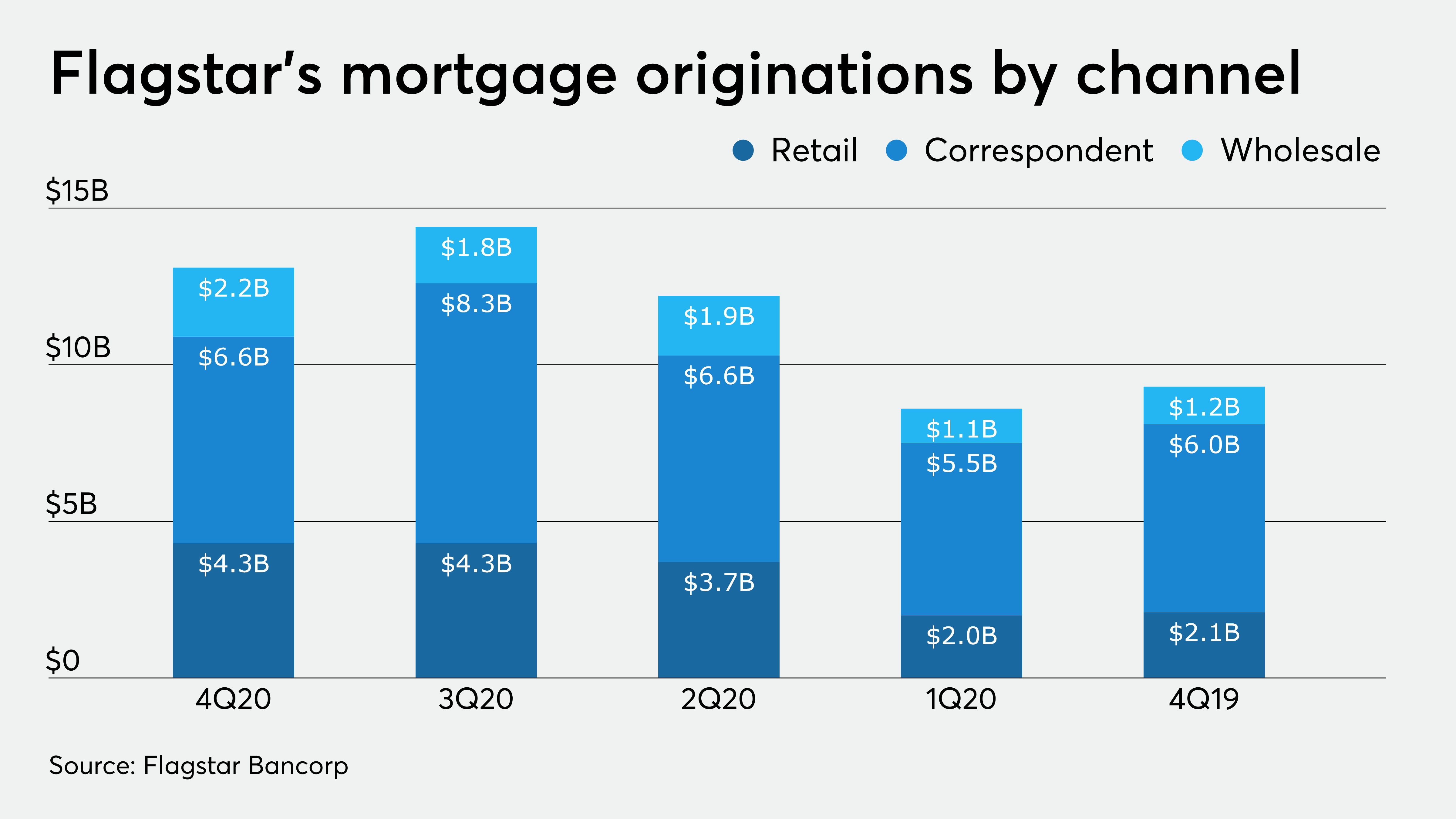 "Our mortgage team continues to deliver, achieving revenues of $232 million for the quarter," Alessandro DiNello, Flagstar's president and CEO, said in a press release. "While gain-on-sale margins did compress, we were pleased with how well they held up, finishing at 1.93% for the quarter."

The fourth-quarter mortgage revenue was down from $358 million in the third quarter, but well above the $98 million the segment reported one year ago. The quarter-to-quarter drop was attributed to a 38-basis-point decrease in the gain-on-sale margin, Flagstar said. In addition, it had zero net return on its mortgage servicing rights, a drop of $12 billion compared with the third quarter, as loan prepayments continued to be elevated.

But there was a shift in the composition of the servicing portfolio. While Flagstar's strategy normally involves selling off the rights it generates and retaining the subservicing function, it held on to more of the rights over this period.

However, there are indications that Flagstar's focus may have shifted as jumbo volume increased to $2.4 billion during the fourth quarter, up from $1.6 billion in the third quarter. At the same time, conventional production fell to $10.2 billion from $12.5 billion.

But the pullback in government-guaranteed lending was apparent when comparing these earnings with last year's numbers, as Flagstar did approximately $500 million during the fourth quarter, up from $300 million in the third quarter, but below the $2 billion originated in the fourth quarter of 2019.

By channel, correspondent purchases fell to $6.6 billion from $8.3 billion in the third quarter, but up from $6 billion in the fourth quarter of 2019. Retail was flat on a quarter-to-quarter basis, at $4.3 billion; one year prior, it was just $2.1 billion.

Flagstar's warehouse lending business, which provides credit to lenders who sell to the bank directly as well as to those that sell to secondary market investors, was a bright spot for the company as well.

Warehouse lending, along with lower deposit costs, was the driver of the $9 billion quarter-to-quarter increase in net interest income at Flagstar.

"Our impressive performance in warehouse, coupled with a concerted effort to reduce funding costs, resulted in a flat net interest margin," DiNello said. "In fact, net interest margin actually expanded 4 bps when excluding those loans with government guarantees where we have the right to repurchase."

The average warehouse loan balance during the fourth quarter was $6.9 billion, up from $5.7 billion three months prior.